For somebody who keeps tabs on the best new fly-fishing gear, I still rely on plenty of old standbys. A Winston LTX I purchased 20-plus years ago, for example, is still my favorite 5-weight rod. When I can find time to tie trout flies, I do so on the Renzetti Traveler vise that my dad gave me when I was in high school. Also dating back to my teenage years is the Wheatley fly box that I use for nymphs. (I’ve had to replace the foam inserts a couple of times over the decades; otherwise it’s good as new.) And my go-to fishing hat is a Sage ballcap that I purchased at a Missoula fly shop…in 2001.

Then there are my waders. They’re not as old as the gear above, but they have 13 trout openers under their wading belt. Sure, they’ve sprung leaks here and there—but nothing a touch of seam-sealer couldn’t cure. And while I’ve definitely eyed nicer, newer waders over the years, I could never bring myself to pull the trigger. How much better could one pair of breathable waders be over another, I thought.

Turns out, a whole lot better.

This lesson came to me firsthand last fall when I got my hands on a sneak-peek pair of the newly redesigned Simms G3 Guide Waders. They are, without question, the best fly fishing waders I’ve ever worn. Let me tell you why.

A Brief History of the Simms G3 Guide Waders

The first pair of G3s hit fly shops 20 years ago. The G3 was the third product in Simms’ line of Guide waders. First came the Guide, next the Classic Guide, and finally the G3. “The G3 was a springboard into what I think of as a really advanced technical wader development,” Matt Carara, a product line manager at Simms, told me during a recent interview. “It brought in a five-layer Gore-Tex to have that ideal balance of comfort and durability. It brought in a really nice, woven chest pocket that could also serve as a hand warmer. And it had anatomically correct stocking feet and built-in gravel guards.”

In 2008, Simms upgraded the G3—most notably with their patented front and back leg seams, which created a natural articulation in the leg. (If you look close at a pair of G3s when they’re suspended from a hanger, you’ll notice they have a slight bend in the knee, which is part of why they move so well and are so comfortable.) 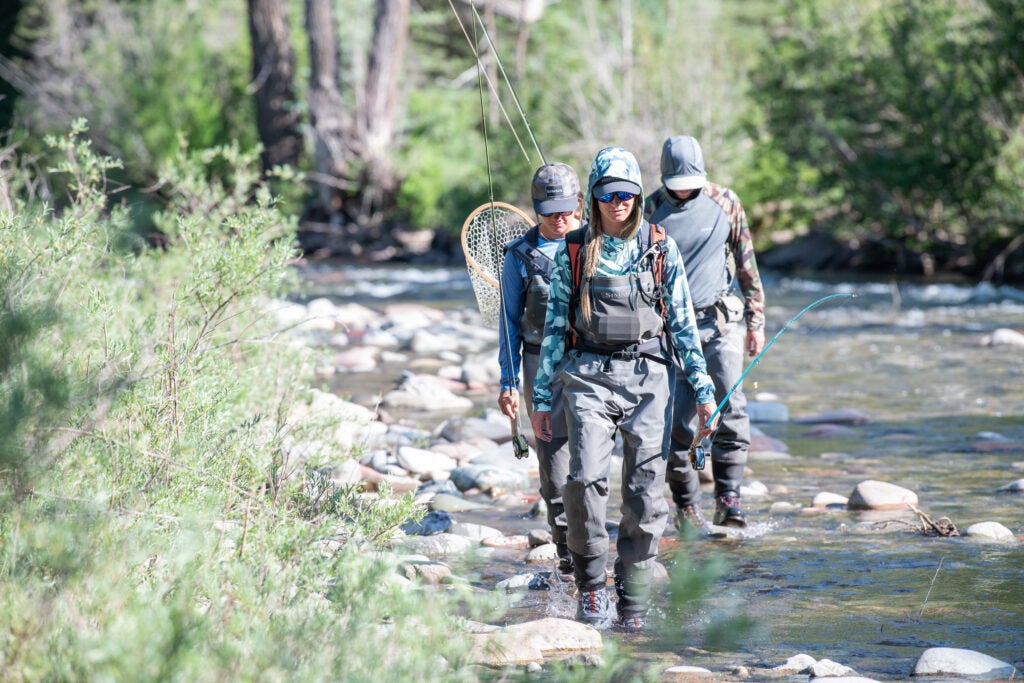 The new G3s are available in men’s and women’s styles, as well as a G3 pant. Simms

Further upgrades were made in 2014 (better durability and breathability; a slimmer chest pocket), and again in 2018 (going from a five-layer Gore-Tex laminate in the lower leg to four layers, allowing for even better breathability without sacrificing on durability). By the time that fourth iteration of the G3 Guide Wader had been released, Simms had all but planted the flag as the maker of the best fly fishing wader in the game. You could’ve understood if they’d stopped and settled there. But one of the things that make Simms such a successful company—and one that earns brand loyalty from fly bums like me—is that they never settle. They’re always looking for ways to improve their products.

Which brings us to the latest upgrade to the G3.

“There are a lot of tweaks we made,” Carara says of the all-new G3s, going on to describe the wader as their most advanced version yet. The most notable improvement is an all-new four-layer Gore-Tex laminate in the lower half of the waders—specifically a new outermost layer, or “face fabric,” that provides more breathability and durability, and that is exclusive to Simms.

According to third-party testing, this face fabric increased the G3’s tear strength by 7.5 percent; puncture resistance (i.e. barbed wire) by 23 percent; and pinhole-puncture resistance (i.e. thorns) by 84 percent. Breathability on the new G3s improved by 33 percent. While the new-and-improved laminate is the biggest update, the changes Simms made don’t end there. Moving from the stocking foot to the shoulder strap, here’s a quick rundown:

The new G3 Guide Waders are also available in women’s. And as has been the case for every version of G3s for the past 20 years, each pair is made in the U.S.

The first time I wore these waders, I was standing in the living room of my apartment. Not exactly ideal conditions, I know, but the dress rehearsal was still enough to make a mental note for the review: Most comfortable waders ever. Three days later, I hit the river.

As I was rigging up, the first feature I noticed was the lack of gravel-guard hooks. Honestly, it seemed like an oversight on Simms’ part—that is, until I rolled the guards over my boots. The fit was so tight and secure that I knew they wouldn’t be going anywhere. Second mental note: Why the hell didn’t anyone think of this sooner? 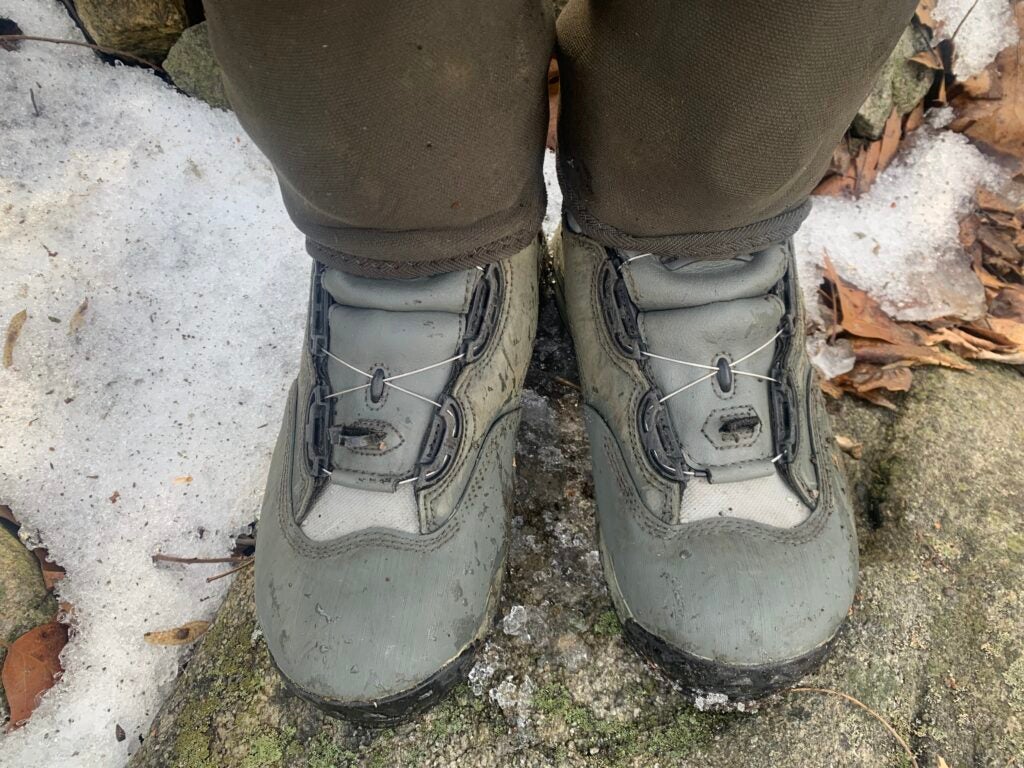 When it came to testing the durability of the new G3s, my home river made for a near-perfect setting. Getting down to the water requires a careful walk down a steep hill that’s either rocky, brushy, thorny, or, in some spots, all of the above. During the half-dozen fishing trips I took while testing the waders, I often went out of my way to trudge through the thickest, most pokey cover, and I purposely scraped the outer layer of the waders against rock faces. All this before I even stepped into the river—which can be a beast of its own.

My boots are studded with cleats, and I use a wading staff as if it were a crutch—but they’re still not enough to keep me from tripping and tumbling over the river’s mix of slippery stones and boulders. I point this out, because, unlike on the hilly riverbank, I didn’t have to go out of my way to test the durability of the G3s once I was in the water. These waders (and my legs) took a serious beating on every outing—and not once was there even the tiniest pinprick of a leak. (I can’t say the same for my other waders. They need patchwork after every season.) Third mental note: These things are as tough as my waterfowl waders.

Concerning the breathability of the G3s, I had zero issues. My testing sessions, though, started in early November and continued through mid-February—and the river was cold. I’ll be curious to see how they perform in warmer conditions during the summer. That said, I was very impressed with how warm I stayed in these waders. On my second-to-last outing, the temps never rose above 30 degrees. Underneath the waders, I wore a thin merino base layer and a pair of fleece sweatpants, and couldn’t have been more comfortable. Also, the hand-warmer inside the chest pocket was a godsend.

The waders have a convenient (and removable) Tippet Tender tucked inside the bib. I’ve yet to make much use of it, though. I’m a Type A angler and prefer to keep each piece of tackle in its meticulously designated vest pocket. But the Tippet Tender is there to use, and like every detail on these waders, it’s well designed and clearly thought-out.

Going back my initial note on the G3s: It’s hard to overstate how comfortable these waders are. There’s almost a stretch to them that I felt as I climbed from rock to rock or got in and out of the water. They wear like the most perfectly broken-in blue jeans ever. Also, they don’t have that crunchy quality that some breathable waders have. These things are dead silent—another advantage on a river like mine, which often requires stealthy, close-range presentations.

If you were to ask me why it is that I’ve held on to some of the fly gear I own for as long as I have, I’d give you a couple of reasons. One, because I deeply value gear that lasts—and continues to perform. Two, because there are stories in all of that old stuff. I can remember rushing home after work the day that 5-weight rod arrived so that I could fish the evening caddis hatch with it. I can remember the first fly I tied on that Renzetti vise—a gray Sow Bug—that was actually presentable enough to catch a trout. I can remember completing my Wyoming cutthroat slam on Colorado River cutt that rose to a Parachute Adams, and how, after I released the fish, I clipped the fly from my tippet and stuck it on that faded, tattered Sage hat. I could keep going on and on with stories like these.

We’ll see how long this pair of G3 Guide Waders lasts me—and how long they continue to perform—but I suspect that as long as I take care of them, they’ll take care of me. And even though I haven’t had them for that long, I do already have a couple good stories to tell from the time I’ve spent on the river wearing them. One of these days, I’ll have to share them.